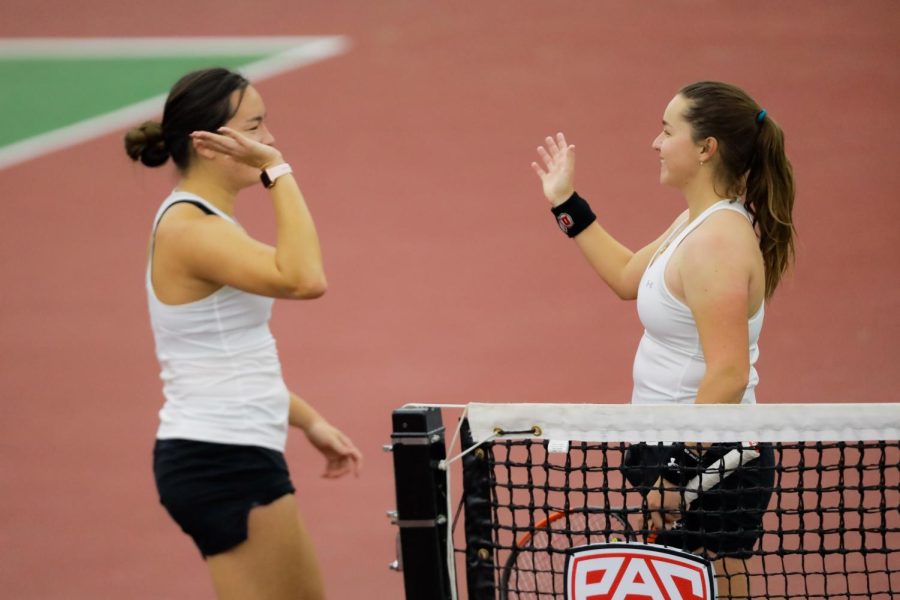 The Utah women met Oregon at home on April 1 at 13:30. The match day started with doubles as Utah’s Madeline Lamoreaux and Emily Dush lost to Oregon’s Allison Mulville and Myah Petchey 3-6.

Utes Linda Huang and Madison Tattini pulled it back as they beat Oregon’s Sophie Luescher and Uxia Martinez Moral 6-4. Anastasia Goncharova and Lindsay Hung of Utah came through as they beat Duck’s Ares Teixido Garcia and Karin Young 7-5, securing the double point for Lady Utes.

Utes started individually with a loss as Hung fell to Gallagher 2-6 and 0-6, while A. Lamoreaux also lost to Arizona State’s Marianna Argyokastriti 3-6 and 1-6. Huang pulled it back, beating Morlet 6-4 and 7-5.

Moving to 13-10 on the year, Lady Utes continue on their downhill slope heading into the Pac-12 Championships. However, they have one more match as they are due to face Colorado at home on April 16 at noon.

The Utah men met Arizona on the road on April 8 at. 14. Starting with doubles, Utah’s Francisco Bastias and Bruno Caula fell to Arizona’s Carlos Hassey and Gustaf Strom 2-6. Arizona got the double point when Utes Mathias Gavelin and Jayson Blando lost to Arizona’s Connor Olsen and Colton Smith 3-6. Franco Capalbo and Geronimo Espin of Utah got their game unfinished against Wildcats Jonas Ziverts and Herman Hoeyeraal, 4-5.

Arizona swept singles as Bastias lost to Smith 1-6 in both sets, Gavelin faced Arizona’s Filip Malbasic, who lost 3-6 and 0-6, and Caula fell to Hoeyeraal 0-6 and 3-6.

Utes looked to be coming back against Arizona State. The Utah men met the Sun Devils away on April 10 at 13.00. Starting with doubles, Gavelin and Blando lost to Arizona State’s Fabien Salle and Nicola Cigna 2-6.

Utes started the singles with a loss as Capalbo fell to Cassone 1-6 in both sets, but Gavelin pulled it back, beating Bullard 6-3 and 6-1, while Caula beat Arizona States Max McKennon 6-2 and 6-1. Utah’s Bruno Krenn beat Stoupe 6-4 and 7-5 and Espin secured the single point and the victory defeated Salle 6-4 and 7-6 (7).