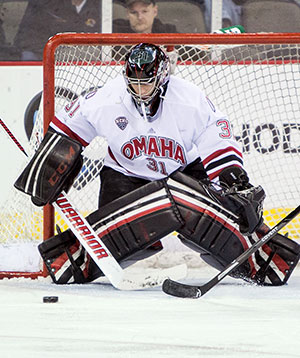 When the Denver Pioneers enter TD Garden later this week, they’ll be in new territory on college hockey’s biggest stage. Except it’s going to be way too familiar for Ryan Massa.

Seven years ago, Massa found himself between the pipes on the same ice, two victories away from a national championship. By the time he was a senior on a young Omaha team, the Massa Mavericks led to the program’s first Frozen Four appearance.

But Omaha’s run fell short when the Mavericks dropped the first game to Providence, which went on to win the national championship. Now in his first year as a volunteer coach at the Pioneers, Massa finds himself on his way back to the Frozen Four and on his way back to Boston.

“It’s a really special opportunity, and one you do not take for granted, but it’s a little funny how it works to be back in Boston,” Massa said. “When I had the chance to become a member of YOU, I was really excited to train at Division I level with a program that is proud of championships. I did not know much about the group, but after the first month of training, you could really see the potential in the locker room, and you knew this was an option.

“We have a lot of youth, which is similar to what I had in Omaha during our Frozen Four race. But I feel I can take that experience from my time as a player and help this team in yet another Frozen Four. Hopefully there is this time a different result. “

Pioneers (29-9-1) have been working towards this weekend since before the puck even fell in early October. The highest scoring team in the country (averaging 4.3 goals per game), it’s no surprise that Denver is among the top four this weekend.

After posting an 18-6-0 mark in conference play, Denver won a share of the Penrose Cup and finished as the top seed in the NCHC. The Pioneers participated in the NCAA Tournament as No. 1 seed and won victories over UMass Lowell (3-2) and Minnesota Duluth (2-1) to win the Loveland Regional. All four top frogs advanced, and the Pioneers will face the Michigan Wolverines on Thursday in Boston.

Looking at the Denver series, Hobey Baker finalist Bobby Brink, Cole Guttman and Carter Savoie get most of the attention. Their blue line is also one of the most talented in the country with, among others, Mike Benning, Sean Behrens, Shai Buium and Justin Lee. But they have also got solid play between the pipes.

It may be overshadowed by the explosive offense, but it has been a complete team effort.

“We’ve got great goalkeeper treatment, our (defenders) have been good and our attackers are doing their job and putting the puck in the net,” said Massa. “It’s been a full team effort to reach this point, and at this time of year, good teams are finding ways to win.”

The ‘big goalkeeper game’ is thanks to junior Magnus Chrona’s game. Tampa Bay’s election in the fifth round of 2018 (which has since had its rights swapped for San Jose) is 26-8-1 this season with a 0.909 save percentage and 2.16 goals against the average. Chrona has also recorded six shutouts.

But he will be the first person to tell you that last season was not the year he wanted. The Swedish netminner struggled to find consistency, and the pioneers fell short in the NCAA tournament for the first time since 2007. It sounds cliché, but Chrona said early this season that his focus was simply on getting back to basics.

“It’s been a really fun ride so far and it’s crazy that we’re two wins away from winning a national championship,” Chrona said. “It has been an up and down season at times, although we have had great success, but all teams somehow hit the point where they struggle a bit. I think we got over it pretty quickly and have done a fantastic job ever since and we are really safe as a group. “

Massa specifically mentioned that confidence, but he has also noticed more intensity and a better mindset from the juniors as the season has gone on. From Chrona’s point of view, there are specific details about his game he has tried to work on; He plays deeper in the fold, his speed has improved and he feels he is tracking the puck better.

But having Massa’s guidance has also made a difference.

“I feel like I’ve leaned a lot on him and he’s been really good at jumping ideas out of,” Chrona said. “He’s been a great support to me and he’s helped me a lot. We talk every day about things we can do differently, things we do well, and he’s just a good support to have.

“He played in college, played a bit in the pros, so he knows how he develops and the road and what it takes. It’s been great to have him this year and he’s been a big part of my development and consistency in year.”

When Massa took up the job in September, one of the first things the two did was sit down and have dinner. There was one goal Chrona took up during the meal that could become a reality this Saturday.

“I watched his entire feature film from last season and gave him my perspective on what to work on and he was very receptive. And we’ve had a good relationship since. Then it was my job as a coach to make sure he “has been constantly improving from week to week, and he has done that. He has helped us to this point, but I know he has focused on achieving that goal.”

From Massa’s point of view, he has seen an expanded role throughout the second half. He has gone from working solely with Denver’s goalkeepers to standing behind the bench and helping the team where he can. Massa said he is extremely grateful to David Carle and the rest of the Denver staff. He joked that they have helped broaden his perspective of the game outside the fold.

Specifically this weekend, however, his focus will be on what happens in the fold. It will be surreal to be back in TD Garden, but Massa hopes what he learned during the 2015 race will make a difference. At the end of the day, he will do what he can to help Chrona and the pioneers reach their goal.

“It’s a unique situation, but it’s an area where I think I can help this week,” Massa said. “When you look back at it as a player, you’re almost in shock when you get there, and there’s not really a way to prepare for it. The media attention, the police escort, Boston Garden and all the tumult that comes with get a seat in the Frozen Four.

“So I really hope I can help our guys stay focused on the current task and use my experience to help them not get distracted by all those extra courses. I think the team that does that best, will be crowned as a national champion and I want to help our group where I can. I want to make sure we are that team. “