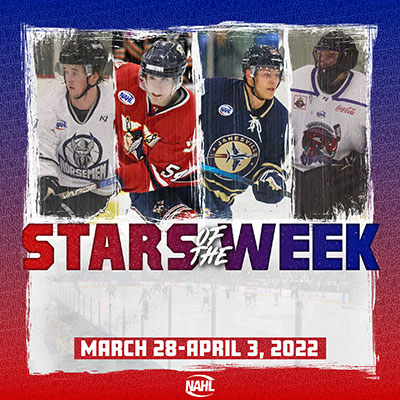 St. Cloud striker Blake Perbix, 20, had a great week helping the Norwegians in the Central Division win three more victories in four games in the past week. The 5’9 / 165 lbs. resident of Princeton, MN, had five points and was +5 in the three games. The week began Wednesday when Perbix had a couple of assists in a 4-3 overtime victory in North Iowa. On Friday, he scored the battle-winning goal in a 3-2 home win over the Bulls. On Sunday, he had a couple of assists in a 4-1 win in Janesville. For the season, the recruit from Northern Michigan is a draw at 4th in team scoring so far this season with 48 points in 53 games played. “Blake is a very smart player and has great offensive instincts. We need him to be a part of our scoring for success, ”said Norsemen head coach Corey Millen.

Star of the Week in the East Division: Egan Schmitt, striker, Johnstown Tomahawks

Johnstown Tomahawks striker Egan Schmitt, 20, had a great weekend with four points to help the Tomahawks take a weekend showdown with division champion New Jersey Titans. The 6’1 / 175 lbs. resident of Cambridge, NY, began the weekend with two goals, including the overtime winner, in a 4-3 victory Friday. On Saturday, he picked up a couple of assists in a 4-1 win in New Jersey. For the season, Schmitt has scored 33 points in 41 games to date. “Egan had a great weekend for us with offensive contributions and relentless play all over the ice. He has been such a valuable 200-foot player to our lineup this season and he really delivered a great weekend for us. We needed guys to go up and he was definitely one of the guys leading the way. We will need it and more from him as we move forward. I’m proud of the way he lifted his game and helped us win two crucial road wins in New Jersey, says Johnstown’s head coach Mike Letizia.

Star of the Week in the Midwest Division: Jan Lasak, Forward, Janesville Jets

With two wins in three games last weekend, the Janeville Jets and striker Jan Lasak, 19, remained in the hunt for the final playoff spot in the Midwest. The 6’2 / 180 lbs. resident of Banska Stiavnica, Slovakia, had five points in the three matches. On Friday, Lasak had one goal and two assists in a 5-1 away win against the Minnesota Magicians. On Saturday, he had an assist in an 8-3 win. On Sunday, he scored the lone goal for the Jets in a 4-1 home loss at St. Louis. Cloud. For the season, St. recruits Lawrence and 2nd in team scoring to date with 50 points in 47 games played. “Jan was great for us last weekend and has been so all season. He is a leader and excellent teammate. We are dependent on him at both ends of the field providing offensive and at the same time being one of the most responsible and gifted defensive strikers in the division. He does so many things well, and the trait our staff values ​​most of him is his consistency. Every single workout and game you can count on him to do his job. We are very proud of him for being recognized for his play this weekend and all season, says Jets head coach Parker Burgess.

Behind yet another great weekend performance from goalkeeper Devon Bobak, 20, the Shreveport Mudbugs won the final playoff spot in the South Division with a weekend stay of the Odessa Jackalopes. The 6’4 / 194 lbs. resident of Northwood, OH, stopped 63 out of 65 shots over the weekend, allowing only a single goal in each of the wins. On Friday, he made 33 saves in a 4-1 victory. On Saturday, he made 30 saves in a 2-1 victory. Bobak is among the NAHL’s league leaders in goal as he is number 2nd in goals against the average (2.02), and ranks 3rd in save percentage (.924) and wins (27). “Our team needed another great weekend and Devon came through for us again. We were so lucky to give him a good running support early in Friday’s match, so we relied heavily on him on Saturday. Our goalkeeping has been a integral part of our team’s turnaround, and this weekend was no different as Devon led the way for us and helped us win a playoff spot, ”said Mudbugs head coach Jason Campbell.