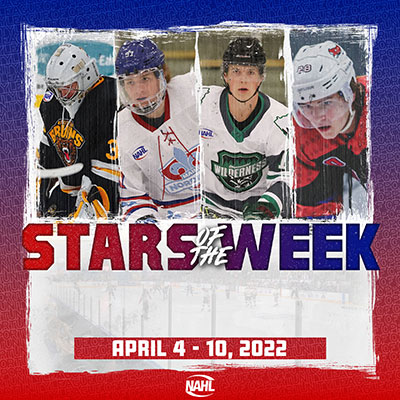 Austin Bruins goalkeeper Klayton Knapp, 18, had a great weekend as he helped his team move up in a draw for 2nd place in the central division with a weekend-home sweep of the Aberdeen Wings. The 6’2 / 180 lbs. resident of Waterville, OH, stopped 49 of 51 shots in the two wins. On Friday, Knapp stopped all 25 shots that came his way in a 3-0 shutout victory over the Wings. On Saturday, he made 24 saves in a 3-2 victory. For the season, the NAPHL rankings have a record of 16-13-1 in 30 games played with 2.74 goals against the average and a save percentage of 0.904. “Klayton was great for us last weekend and has been all year. He had to make a couple of key saves in both games, otherwise the results could have gone the other way. We expect Klayton to stay focused and follow it up again this weekend, ”said Bruins head coach Steve Howard.

Star of the Week in the East Division: Zion Green, Forward, Maine Nordiques

Maine Nordique striker Zion Green, 17, had a great week last week as Nordiques played in three games. The 5’11 / 170 lbs. resident of Birmingham, MI, had six points in the three games, which included three goals and three assists. On Friday, Green had one goal and three assists in an 8-3 win over the Tomahawks. On Saturday, he had a goal in a 6-4 loss to Johnstown. On Sunday, Green had another goal in a close 4-3 away loss to Northeast. For the season, the recruit is from Northern Michigan 2nd in team scoring with 47 points in 55 games to date. “Zion loves to get better on the rink every day. He is a student of the game and seeks development in all aspects of the game. He has had great growth this year as a productive winger and with a focus on his entire game. His ability to create “Offensive makes him a fun player to watch and his linebackers have fun out there with him. We are very proud of Zion and are excited to continue to help him become an excellent Northern Michigan Wildcat in the future,” said Maine. head coach Matt Pinchevsky.

Star of the Week in the Midwest Division: Gunnar Thoreson, Forward, Minnesota Wilderness

Wilderness forward Gunnar Thoreson, 20, had a big week last week, which began with an NCAA Division I commitment to St. Louis. Lawrence and was followed up by a productive weekend in a highway series in Janesville. The 6’0 / 185 lbs. resident of Andover, MN, got four points in the two games and was a +2. On Friday, Thoreson had a goal and an assist in a 6-2 victory. On Saturday, he had a shorthanded goal and an assist in a 6-3 loss. For the season, Thoreson is 2nd in team scoring with 59 points in 58 games to date. “Gunnar had another fantastic weekend for our team. He comes with everything every night and is a big factor in our continued success, ”said Wilderness head coach Dave Boitz.

Odessa Jackalopes striker Tanyon Bajzer, 19, had a great weekend to help his Jackalopes pick up a weekend road trip by the Amarillo Wranglers. The 6’1 / 170 lbs. resident of Shaker Heights, OH, had four goals in the two wins and was +4 in the series. On Friday, Bajzer had two goals in 3rd period to help the Jacks win 6-1. On Saturday, he scored two more goals and then scored the shootout winner in a 3-2 shootout victory. For the season, Bajzer has 28 points (17 goals, 11 assists) in 47 regular games played to date. “Tanyon had a great weekend. Over the course of the season, Tanyon has grown and developed his game, and we were delighted to see him leave this weekend, ”said Odessa head coach Scott Deur.