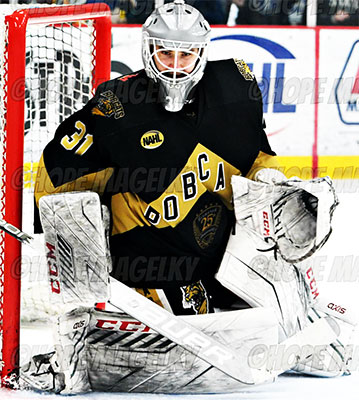 Oskar Spinnars-Nordin led Bismarck to two wins this weekend as they stayed alive in the Central Division playoff race.

Lone Star 4 @ New Mexico 3: The Brahmins scored three goals in the 3rd period, to come from behind and defeat the Ice Wolves on Saturday, 4-3, winning the South Division regular season title for Brahmas. Lone Star opened up a 1-0 lead in 1st period thanks to a goal from Matt McQuade. Ice Wolves took over in 2nd period where they put themselves ahead 2-1 with goals from Dillan Bentley, who had two goals in the match, and Sully Scholle. In it 3rd period, Brahmas stormed back with three goals from Ryan Prewitt, Tanner Daniels and Ray Murakami to secure the victory. Arthur Smith made 26 saves in the win, while Beni Halasz made 26 saves in the loss.

Bismarck 2 @ North Iowa 1: The Bobcats stayed alive in the Central Division playoff hunt as they completed a weekend showdown with the Bulls thanks to a 2-1 victory on Saturday. With the victory, Bismarck now sits only one point behind 4th place Minot with two games left next weekend against Minotauros. Nico Chmelevski opened the scoring for the Bobcats in 1st period. Michael Mesic equalized the match for North Iowa midway through 3rd period. Jon Ziskie got the game winner at 12:14. Bobcat’s goalkeeper Oskar Spinnars Nordin made 30 saves in the win, while Hunter Garvey made 32 saves in the loss.

Wichita Falls 4 @ El Paso 0: Daniel Duris stopped all 21 shots that came his way for his 4th closed out the season as the Warriors closed out the Rhinos for the second night in a row, this time with a 4-0 score on Saturday. Cade Lemmer had three points in the victory for the Warriors. After a goalless 1st period, the Warriors exploded to three goals in 2nd period when Lemmer, Nick Comfort and Brendan Williams all scored. Adisen Brueck added a 3rd period goal to complete the score. El Paso goalkeeper Jacob Zacharewicz made 38 saves in the loss.

St. Cloud 2 @ Minot 0: Ethan Dahlmeir stopped all 29 shots that came to his was for his fourth shutout of the season as the Northerners closed out the Minotauros, 2-0 to complete a weekend sweep. After a goalless 1st period, the northerners started scoring in 2nd period when Blake Perbix scored his 22ndnd goals of the season. Sent in 3rd period, Evan Murr added an empty goal to secure the win. Minot goalkeeper Zach Sandy made 49 saves in the loss.

Jamestown 3 @ Danbury 2 (OT): John Lundy got the overtime winner when the Jamestown Rebels won their ninth game in a row, a 3-2 decision over Danbury Jr. Hat Tricks. Danbury jumped out to a 2-0 lead in the second period as Luka Sukovic and Logan Nickerson scored in the second period. Jamestown responded with two own goals from Mitch Lafay and Lucas Klemm. After a goalless third period, the teams went into overtime, with Lundy netting his 31st of the season with Jak Vaarwerk and Klemm picking up the helpers. Nolan Suggs took the win in goal as he stopped 27 shots. Adam Johnson took the loss despite making 32 saves.

Aberdeen 2 @ Austin 3: After winning their ticket to the Robertson Cup playoffs in 2022, the Austin Bruins continued their weekend success over the Wings, taking them down 3-2 to secure the sweep. After a pointless 1st period, both Ocean Wallace and Braidan Simmons-Fischer turned on the light for the Bruins. Kevin MacKay helped keep the difference to just one goal with a goal without an assist for Aberdeen. Early in the final picture, Carson Riddle scored his 20th goal of the season to double the lead. Cade Neilson would answer for the Wings, but it was not enough as Klayton Knapp would stop the remaining shots and secure the victory. Knapp finished the night by making 24 saves, while Anton Castro took the loss and kept 33 out of 36 shots out.

Odessa 3 @ Amarillo 2 (SO): Tanyon Bajzer scored the lone goal in the penalty shootout to give Odessa the win and the weekend. Bajzer gave Odessa the first lead of the match with a goal in the late 1st period. Bajzer scored another goal in the 2nd period to bring his season goal to 17, but a goal from Ben Biester helped the Wranglers with a draw before the 3rd period. Kristaps Skrastins scored his 35th of the season, on power play, with only 45 seconds left to bring the game to extra time. After a pointless overtime, William Proctor would finally secure the win, making 30 saves on 32 shots and stopping all three Amarillo’s shootout attempts. Max Gutjahr lost 25 saves.

Corpus Christi 4 @ Shreveport 2: Saturday night’s match between Corpus Christi and Mudbugs turned out to be a goalkeeping match as the visitors won with a final score of 4-2. Shreveport took the first lead of the competition as Austin Brimmer scored six minutes inside the first. Just minutes later, Dylan Contreras found the back of the net on powerplay to equalize. Jude Kurtas scored the lone goal in the midfield and gave Corpus Christi the edge after 40 minutes of play. Michael Casey Jr. tickled twine early in the 3rd to double the lead and late in the 3rd Casper Gillberg set aside the empty nights to seal it. Drake Morse would give Shreveport their 2nd goal with 24 seconds left of regulation, but it was too late. Damon Beaver snatched the victory between the pipes and kept 27 of 29 shots out. Simon Bucheler took the loss and stopped 26 of 29 shots.

Maryland 1 @ New Jersey 2 (SO): Anthony Calafiore scored the game’s decisive goal in the penalty shootout to lift the New Jersey Titans to a 2-1 victory over the Maryland Black Bears. Nick Ring scored just 2:29 in action to put New Jersey on the board first. We waited until early in the third period for the response from Maryland. Brad McNeil struck at the powerplay to equalize the match to one goal apiece. After three rounds of shootout could not break the tiebreak, Andrew Takacs Branden Piku stopped in the fourth round, putting Calafiore’s game winner. Luca Di Pasquo was saddled with the loss as he made 35 saves while Takacs stopped 32 shots to earn the victory between the pipes.

Johnstown 6 @ Maine 4: The Johnstown Tomahawks opened offensively in the second period, scoring 3 goals and beating the Maine Nordiques in a 6-4 final. In the first period, Patrick Schmiedlin (10:53) scored the first goal of the match and gave Nordiques a 1-0 lead. Shortly after, Ethan Perrault (11:33) equalized the match 1-1 to end the first. In the second period, the Tomahawks added three goals, with Jacob Badal, Johnny Ulicny and Jake Black all scoring to give Johnstown a 4-1 lead. In the third period, Ignat Belov (1:30) won early to get Maine back on the board, 4-2. Tomahawks responded with another goal from Jacob Badal (2:47) to make it 5-2. Maine responded with back-to-back goals from Zion Green (4:37) and Filip Wiberg (7:09) to 5-4. Late in the match, Egan Schmitt (17:56) found the back of the net for a 6-4 final score.

Anchorage 0 @ Fairbanks 2: In their last regular season game of the 2021-22 season, Fairbanks Ice Dogs turned the script on the visiting Wolverines and sent off a 2-0 shutout on Saturday. Kayden Hargraves stopped all 28 shots for her first shutout of the season. After a goalless 1st period, the Ice Dogs took a 1-0 lead in 2nd period when Kevin Marx Noren scored a power play goal, which was his 23rdrd goals of the season. Sent in 3rd period, McCabe Dvorak added the second Ice Dogs goal to secure the 2-0 victory. Wolverine’s goalkeeper Raythan Robbins played well in the loss and made 29 saves.

MN Magicians 0 @ Kenai River 3: Brown Bears goalkeeper Bryant Marks stopped all 31 shots that came his way to his first shutout of the season as the Kenai River ended their 2021-22 regular season with a 3-0 win over the Magicians. After a goalless 1st period, the Brown Bears took a 2-0 lead in 2nd period with goals from Hunter Newhouse and Jeffrey Bertrand. Caden Triggs would add an empty goal in 3rd period to complete the scoring. Magicians goalkeeper Josh Langford made 27 saves in the loss.