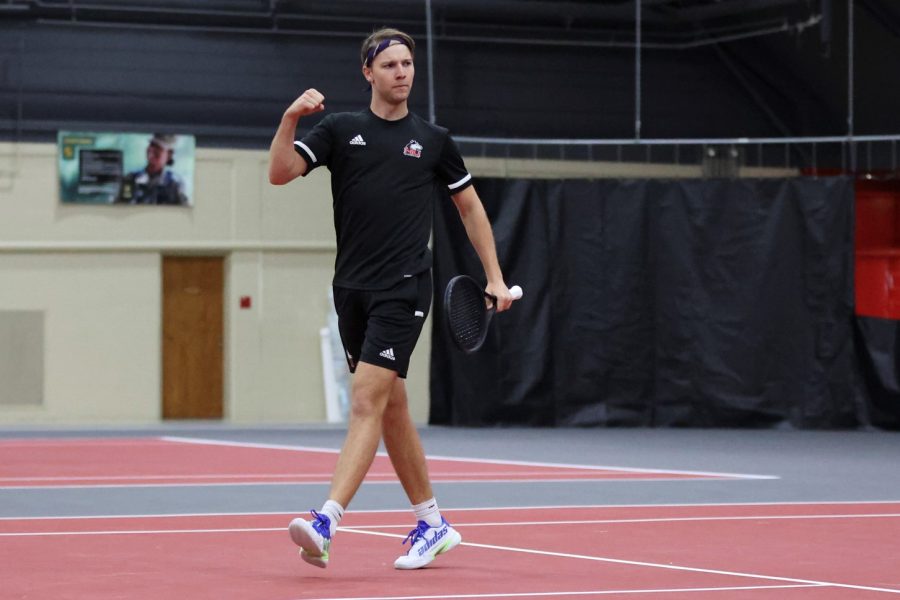 Junior tennis player Oliver Valentinsson celebrates during a match against Binghamton University on April 1 in DeKalb.

Junior Oliver Valentinsson loves to be competitive, and that quality he shows through his hard work and success on the tennis court as Huskie.

Valentinsson grew up in southern Sweden in Malmö.

“Malmö is the third largest city in Sweden, but it only has about 350,000 people,” said Valentinsson.

He said the atmosphere in Sweden is great and it is easy to get around to places.

Valentinsson started playing tennis when he was four years old, and also played ice hockey and European football when he was young.

As he got older, it was time for him to choose a sport to focus all his dedication on.

“I had to choose which sport I wanted to play and I came up with a dilemma and chose tennis because it’s the sport I loved the most,” Valentinsson said.

He likes to hold himself accountable for developing tennis skills because it is an individual sport. Valentinsson is on an upward trajectory and he has a lot more effort he needs to make in this sport.

“Oliver is super competitive, which I think leads to all the success he’s had since joining the team,” said redshirt senior teammate Kristopher Ortega. “Whether it’s training or a real fight, he just doesn’t like to lose.”

He moved to America in 2017 and first attended the University of the Incarnate Word in San Antonio, Texas. He came to the United States alone to get a better education and play tennis.

Valentinsson liked his private school in Texas because of how beautiful the weather and the courses were.

“You knew everyone, including the professors on a very personal level, because they were so open and very sweet,” Valentinsson said.

Although the school and people were sweet in Texas, Valentinsson said he did not feel there was a competitive tennis environment on the courts, so he switched to NIU.

“I left because I wanted to strive for more in terms of tennis and wanted to be recognized on a bigger stage,” said Valentinsson. “I came to NIU and the transfer made a huge difference because NIU lets me strive for higher goals.”

“I think I was comfortable with my team and my coaches and I think I was in a good state of mind that season,” Valentinsson said.

Valentinsson believes that his state of mind was good because when he first moved to America, he struggled with mental health. His family still lives in Sweden, so he does not have them personally to support him.

“Both my parents motivate me to be the best person and best tennis player I can be and they have been a great support system,” Valentinsson said. “I could not be more grateful to them, they are both my greatest inspirations.”

Although he is not with his family, his teammates and coaches are a welcome replacement. He and his teammates are very close and most of them live together.

“I think it’s important for you to develop a relationship with your teammates on a personal level,” Valentinsson said.

“Oliver is a very hard worker and he loves the game a lot,” Ortega said. “He always tries his best and gives it 100% and always puts time off the field.”

The coaching staff is also like family for Valentinsson, and he likes how the coaches push the players.

“They want us to be competitive no matter the circumstances and I would not want it any other way because I am a competitive and emotional player,” Valentinsson said.

Valentinsson’s goal for this season is to win all his remaining matches and enjoy the sweetness of victory. He will give it 110% every time he steps on the field, whether it is training or match.

“I just want to prove that I can be good at what I do, no matter what it is,” Valentinsson said. “I think I do when it comes to tennis.”